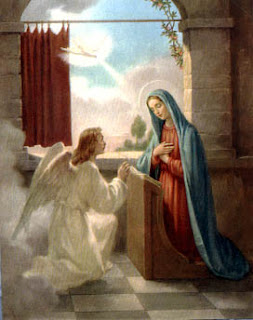 In the first reading we hear God speaking to Ahaz.


God says, “Ask for a sign, make it as high as the sky, or as deep as the netherworld. Anything you want. Make it as outrageous as you can imagine.” Ahaz, who was one of the worst kings they had ever had in , suddenly becomes Mr. Pious (can you blame him, speaking to God), but says, “Oh No! I am not going to tempt God,” as if he hadn’t been all those years that he had been a king.


Yet, God does give him, and us, a sign, so ridiculous, so impossible, and so unimaginable that it can not be mistaken. Imagine that you were a young girl, 13, 14, or 15 years old at the most, and confronted by an angel who says, “God has chosen you to be the mother of his only begotten Son.”


What would you say to such a startling announcement?


How would you react?


The gospel shows us that Mary was greatly troubled at what was said and that she pondered the words. How many of us have been confronted with unexpected events and circumstances that seem to be beyond our understanding and our comprehension. Situations that like Mary, will undoubtedly bring us grief, dishonor, pain, and humiliation?


How are we expected to react to such an event?


How does a faithful catholic respond?


Great question! Let’s turn back to Mary for some guidance. Well, she didn’t lash out in anger! She didn’t strike back in retaliation; she didn’t run away, she didn’t pretend it didn’t happen. But she was confused and frightened. At this point in her life, Mary was betrothed to Joseph but not married. In the Jewish tradition, there were three steps to a Jewish marriage:


The First was “The Engagement” – This was often arranged by the parents through a matchmaker when the boy and girl were children.


The Second was “The Betrothal” – which was a formal ratification of the marriage-to-be, usually done a year before the couple was to be married.


And the Third was “The Wedding” itself – which lasted a whole week and concluded with the consummation.


Mary and Joseph were betrothed, but not married yet. They had not had sexual relations and Mary was a Virgin. However, in spite of this, the Angel Gabriel said that she was to become pregnant and give birth to a son and name him Jesus. Mary was confused, and rightly so. How can this be? She had not been with a man. It doesn’t make any sense. How many situations and events come into our own lives that just don’t seem to make any sense as well?


The angel turns to Mary and says “Do Not be Afraid Mary,” and then declares that the Holy Spirit will come upon her and the power of the Most High will overshadow her. And what is her response? “May it be done to me according to Your will.” What Faith! What Trust! What Docility!  Could it be that God also gives us signs, signs that allow us to grow in faith, in trust, and in docility? Signs that at the time seem so ridiculous, so impossible, so unimaginable, so enormous that we don’t know what or how to react to them? Yet, is there a purpose in those signs? Are they allowed to occur in order for us to have an opportunity to react as Mary did? Mary’s “Yes” wasn’t without pain.


Do you think she completely understood what was happening and why? I don’t think so.... and can you imagine the pain she must have experienced. Yet, did she even complain once! So do we always have to know why something is occurring in order to respond in faith?


Mary’s response was born out of humility and in trust in the providence of God. The good news is that such a response is also possible for all those who turn to God in faith and trust.


So the next time a situation presents itself to you,


·       something that seems just too great too understand,

Don’t run away, don’t ignore it, and don’t try to completely understand it before you act.


Let the Holy Spirit come upon you, and the power of the Most High overshadow you, And then, keep your eyes and your heart open to see where God is leading you, just as Mary was lead, on a journey of holiness, and a journey toward a relationship with her son, Jesus Christ, the Savior of the world.
Posted by Deacon Pat at 11:33 AM