As many of you know, Pope Benedict has declared this year, The Year of Saint Paul.

In his wisdom, and grace, Pope Benedict must feel that Saint Paul has something very important to impart onto us. 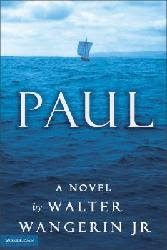 I was just loaned this book to read from a Friend. I just started and it appears to be a good read. I will let you know what I think as I progress. Here is a little info on the book as follows:

With imagination and depth, Walter Wangerin Jr. weaves the history of the early church and its greatest apostle into a powerful epic.

Paul is more than a novel. It is a masterfully crafted world of rich color, stunning imagery, and gripping immediacy.
Journey with Saul of Tarsus from Jerusalem's temple and the martyrdom of Stephen to a transforming encounter with the risen Christ on the road to Damascus, then beyond to a waiting world.
It is a world of bustling marketplaces filled with the smell of animals and the cry of merchants . . . faces, cultures, and traditions as diverse as the varied landscape . . . and human character and passions playing out in city streets, in corridors of power, and in homes of the humble.
Here, in the shadow of imperial Rome, the early church is unfolding its vigorous bud. And the man Saul, whom the Gentiles know as Paul, will spread its seed, the Gospel of Jesus Christ, to the ends of the known world.
Wangerin shows you Paul and his times through many eyes: Barnabas of boisterous joy, whom Paul forces into distressful decisions.
James, head of the church at Jerusalem and arbiter of the fierce clash between grace and Jewish law.
Prisca, who, with the help of her husband Aquila, saves Paul's life at the risk of her own.
Seneca, statesman whose ascent from exile to adviser for Nero reveals the volatile political backdrop of Rome.
Luke, whose account from the book of Acts laces together Wangerin's imaginative vignettes with the strong thread of Scripture.
Paul himself, speaking directly through his letters.
And others who know the man and his character, his foibles, and the power of his ministry.
Here is an intimate portrait of a complex individual, and of God at work through him, turning the world upside down.
The joy of worship, the drama of a miracle, the brutality of a stoning, the price of commitment, the depth of divine and human love . . . Paul: A Novel is unforgettable. Intimate and human, this is Paul, citizen of Rome and of the Kingdom to come.
Posted by Deacon Pat at 9:10 PM