Feast Of All Souls', November 2nd 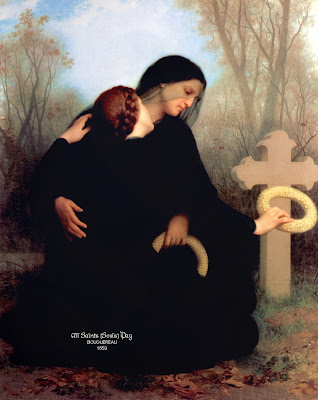 The Church has encouraged prayer for the dead from the earliest times as an act of Christian charity.
"If we had no care for the dead," Augustine noted, "we would not be in the habit of praying for them."
Yet pre-Christian rites for the deceased kept such a strong hold on the superstitious imagination that a liturgical commemoration was not observed until the early Middle Ages, when monastic communities began to mark an annual day of prayer for the departed members.
In the middle of the 11th century, St. Odilo, abbot of Cluny (France), decreed that all Cluniac monasteries offer special prayers and sing the Office for the Dead on November 2, the day after the feast of All Saints.
The custom spread from Cluny and was finally adopted throughout the Roman Church.
The theological underpinning of the feast is the acknowledgment of human frailty. Since few people achieve perfection in this life but, rather, go to the grave still scarred with traces of sinfulness, some period of purification seems necessary before a soul comes face-to-face with God.
The Council of Trent affirmed this purgatory state and insisted that the prayers of the living can speed the process of purification.
Superstition still clung to the observance. Medieval popular belief held that the souls in purgatory could appear on this day in the form of witches, toads or will-o’-the-wisps.
Graveside food offerings supposedly eased the rest of the dead.
Observances of a more religious nature have survived. These include public processions or private visits to cemeteries and decorating graves with flowers and lights.
This feast is observed with great fervor in Mexico.
Posted by Deacon Pat at 6:52 AM