I Was Assaulted By An Abortion Clinic (Planned Parenthood) Worker. 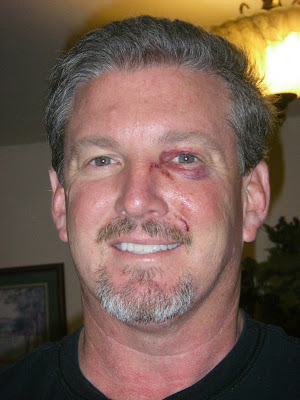 I don't know why the lady became so angry.
All I was doing was praying my rosary outside the abortion clinic and a big ugly lady ran up to me and took my protest sign and swung it with all her force right into my eye.
I don't know if it was my presence at the clinic or the sign that stated
"You care more about your Starbucks than that human being inside of you."
Just kidding - this really didn't happen!
The real story is that I was going to the dump and my truck was full of
"Yes on Proposition 8"
Yard signs.
You know the proposition that by California vote made a constitutional amendment to the California Constitution stating that marriage can only be between a man and a woman.
Well the election was over and I was getting rid of all the signs.
When I was driving to the dump, a car full of well dressed, happy men started to follow me and were yelling obscenities at me. They acted as if I violated them in some way. They tailed me all the way to the dump and when I arrived, they jumped out of their Toyota Prius Hybrid and began to pummel me with the signs, and a large man who looked similar to George Clooney stated
"I might be Gay, but I am a human, you can't take the love away from Butch and I, we will get you in the liberal courts....."
Well, that isn't true either. 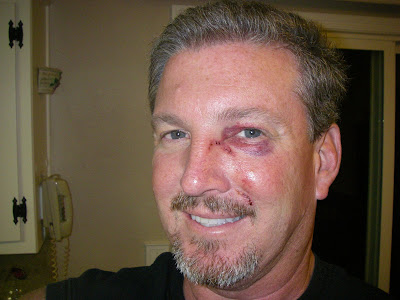 The real story is:
I had an incident at work with a psychotic client who came after me, I avoided injury from the client, but my eye lost the fight with the furniture as we both were flung toward the ground.
I think the other stories sounded better.....what do you think?

Couldn't you have waited until Advent? Then the purple would have matched your stole color! :-)