We grow them Big up here - Chinook Salmon 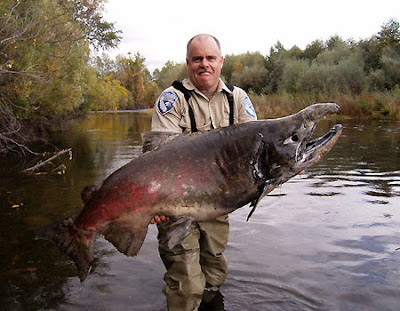 Wildlife officials in northern California last week came across one of the biggest Chinook salmon ever found in the state — a monster more than 4 feet long and weighing 85 pounds.
The big fish had recently spawned and died, and probably weighed about 90 pounds when it began its 100-mile swim upstream from the Pacific to the spot where it died on Battle Creek, a tributary of the Sacramento River near the town of Anderson. (Neigboring City to Redding)
The California sport-fishing record for a Chinook salmon is 88 pounds. In Alaska, where they're called king salmon, they get even bigger — the record sport catch is 97 pounds, while the largest commercial catch was a truly phenomenal 126 pounds.
Posted by Deacon Pat at 11:15 AM