Profoundly Retarded and Teacher to Many 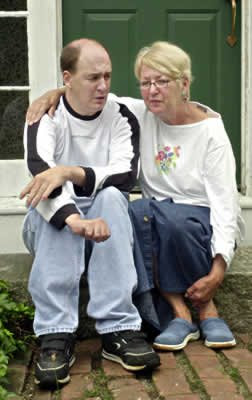 I have a second job where I visit residential homes and provide nursing consultation to the profoundly retarded clients. These are small homes, where six profoundly retarded clients live, along with around the clock nursing staff.
I was visiting a home Saturday and saw that one of the clients was dying. He was full of cancer and was at the end of his life.
As I mentioned, He suffered from profound retardation, had for over 40 years, and appeared in many ways to be alone in the world. Except, his bed was surrounded by 9 different people. These people were present and past care givers.
He had made such an impact on these people that they felt the need to be with him as he was about to take his last breath. They were there on their own time.
The caregivers stated that they called him "Our Man Child."
This was spoken in an affectionate manner.
One man stated that He (The dying man) had taught him so much about his own humanity, far more than any teacher had taught him.
This client could not speak, could not have a conversation, never could, yet he had such an impact on others, that many people who crossed paths with him were drawn to him.
God works is such mysterious ways.
The suffering of one individual, often produces lessons to others.
One event in life, ofter works like a ripple the carries over the top of a lake.
One event starts in motion many different events and produces a variety of other lessons.
Think about the events in your life, what was the catalyst?
How many other people do you think were affected by the same event or situation that affected you?
What was their experience, was the same lesson learned, or a variety of different lessons?
Posted by Deacon Pat at 4:15 PM