Sacred Music and Your Parish 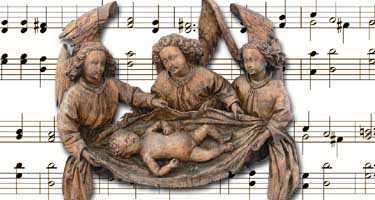 One can walk into nearly any parish today and hear almost any type of music, from Gregorian chant to folk music to heavy metal. While most parishes offer one type of music within a given Mass, some parishes even provide a musical contrast within the same one. I actually attended a funeral Mass in which an electric guitar was used alternately with a harp. Figure that one out if you can.

Pope Benedict XVI, then Cardinal Ratzinger, stated in The Spirit of the Liturgy that "Not every kind of music can have a place in Christian worship." Although individuals can be naturally drawn to certain types of music, sacred music–which is meant specifically for the liturgy — is not derived from natural tendencies or preferences. Sacred music, like the rest of the liturgy, is not about mere self-expression; it is about receiving and participating in what has been passed down to us, such as Gregorian chant.

Gregorian chant — named after Pope St. Gregory the Great (590-604) — is sacred music of the highest order. In the Second Vatican Council’s Constitution on the Sacred Liturgy, Sacrosanctum Concilium, we are told that The Church acknowledges Gregorian chant as specially suited to the Roman liturgy: therefore, other things being equal, it should be given pride of place in liturgical services (Art. 116).

Why does Gregorian chant occupy such a central role in the liturgy? Pope St. Pius X (1903-1914) explains in his 1903 instruction Tra le Sollecitudini that

Sacred music should…possess, in the highest degree, the qualities proper to the liturgy, and in particular sanctity and goodness of form, which will spontaneously produce the final quality of universality (No. 2).

The saintly Pontiff goes on to state in the same document that These qualities [of sanctity, goodness of form, and universality] are to be found, in the highest degree, in Gregorian Chant, which is consequently the Chant proper to the Roman Church, the only chant she has inherited from the ancient Fathers, which she has jealously guarded for centuries in her liturgical codices, which she directly proposes to the faithful as her own, which she prescribes exclusively for some parts of the liturgy… (No.3).

While other types of sacred music (such as polyphony) may be admitted to the liturgy (SC Art 116), Gregorian chant is, according to Pope St. Pius X, "the supreme model for sacred music" (TS No. 3) because of its sanctity, goodness of form, and universality. It has a simplicity, sobriety, and resonance that manifest the beauty of the liturgical action.

The next time you’re at Mass, ask yourself how the music you’re hearing measures up to this supreme model. In many parishes, the goal seems to be the avoidance of this supreme model, rather than the approach toward it. In fact, many Catholics would be surprised to learn that Church authorities have taught anything at all on sacred music, and would probably be even more surprised to learn that specific musical instruments have been named, whether for endorsement or for exclusion.

Can drums, guitars, and pianos be made suitable for sacred use? Do they accord with the dignity of the temple? Do they contribute to the edification of the faithful? Before these questions are answered, it should be pointed out that while many types of music are inherently good, they are not meant specifically for the Mass. Piano music, for example, can be great entertainment at a social function–but the Mass is not a mere social function, it is the Sacrifice of Our Lord Jesus Christ.

There is no better way to sum it up than with the words of our Holy Father, Pope Benedict XVI, from his 2007 encyclical Sacramentum Caritatis:

Certainly as far as the liturgy is concerned, we cannot say that one song is as good as another. Generic improvisation or the introduction of musical genres which fail to respect the meaning of the liturgy should be avoided. As an element of the liturgy, song should be well integrated into the overall celebration. Consequently everything–texts, music, execution–ought to correspond to the meaning of the mystery being celebrated, the structure of the rite and the liturgical seasons. Finally, while respecting various styles and different and highly praiseworthy traditions, I desire… that Gregorian chant be suitably esteemed and employed as the chant proper to the Roman liturgy …(No. 42).

We have the clear instructions, now we need more people to read them and carry them out. St. Cecilia, Patroness of Musicians, pray with us that this will happen, for the glory of God and the sanctification of all.
.
For the full article by Trent Beattie Click Here
Posted by Deacon Pat at 11:06 AM