A Father's Love for a Son! 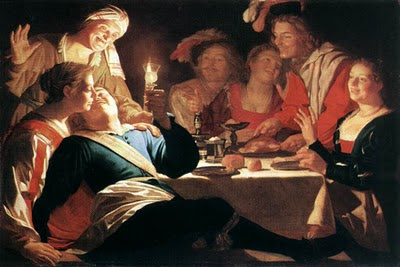 
There is a great desire in all of us to find happiness and to feel fulfilled in our lives. For many of us, our daily focus in life is centered on experiencing enjoyment.

In the Gospel today, this search for happiness is symbolized by the younger son who went in search of personal fulfillment, enjoyment, and happiness. Then only problem with the younger son's journey was that he thought he could find true happiness through a life of what the gospel calls “A Life of Dissipation.” He attempted to find happiness by satisfying every desire he possessed, it didn't matter if it was moral or immoral. This choice of life eventually led him to live with the pigs in the piggery.

I am sure, that if The Father of the Son, or in fact, anyone else had tried to persuade the son that he would be wasting his life and money in this pursuit for happiness, he would not of been persuaded. He had to be left to learn the hard way, from his own mistakes. Doesn't this scenario sound familiar..... familiar for sure to parents, but also familiar to so many of us as well. 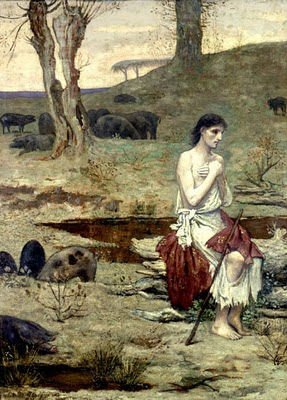 He had to decide for himself to return home. If someone had went to bring him home, or to persuade him to return, I would guess that he would of resented it. The younger son reminds me of the struggle for happiness we see in our society today. In so many ways, we live lives of comfort, easy lives, and yes we really are spoiled. I know that some of us are having difficulties, but most of us really are not. We live in a nice climate, we have plenty of food, we have a home with a roof over our heads, and have well beyond the basics needed to survive. Yet, we find ourselves experiencing a spiritual famine in our country. Because of this spiritual famine, in someways, we have ended up like the younger son living with the pigs in the piggery.

Lets take a moment and think about this.

Self-indulgence has overtaken our society, our families, and our lives. Because of this, we could say that we are, like the younger son, living with the pigs in need of returning to our Father. So why not return? We wont find happiness with the pigs. 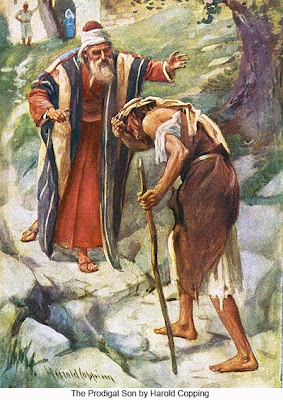 In the Gospel parable, we are given the most beautiful description of our heavenly Father. He is outside of the house waiting for the younger son to return. And when he does return, his father runs towards him, grabs him in his arms and kissed him tenderly, then brings him in and throws a party for him. When we choose to return to God, he also runs toward us, embraces us, and throws a party for us. But He waits for us to make the first move back toward him, that is our free will.

In the Gospel there is another point to be made, maybe more pertinent to many of us here today, and that is the story of the older son. The older son, despite the fact that he was with his father all those years, was shocked that his Father so easily forgave the younger son, embraced him for returning, and even threw a party for him. Even after all those years of being with the father, the older son didn't really know or understand his Father's heart.

The older son never felt accepted, appreciated, or loved by his father. That was “His” problem, not the Father's. So his resentment towards his younger brother was really pointing to a deeper wound; he didn't feel loved. The older son had no real relationship with his Father. He was distant and aloof. He was like the pharisees and the scribes who complained about Jesus' ministry to the sinners (Luke 15:2).

For years the older son had done the right thing but with the wrong attitude. The elder son didn't really recognize his brother as his brother. The elder son could in fact be call “the prodigal son” who stayed at home. He is also lost, but his “lostness” is more difficult to see. So this parable is really about a loving Father and 2 prodigal sons, or two lost sons.

We are all like the elder son in the sense that none of us yet know our Father's heart as we should. How many of us approach the altar and receive holy communion, yet still carry anger and resentment in our hearts? Are we not told that we are to make peace first?

“Therefore, if you bring your gift to the altar, and there recall that your brother has anything against you, leave your gift there at the altar, go first and be reconciled with your brother, and then come and offer your gift.” (Matt 5:24)

Doesn't this help us understand our Father's heart a little better? Probably the most profound and beautiful part of the parable comes at the point where the Father turns to his elder son and states: “All I have is yours.”

Our heavenly Father also tells us: “All that I have is yours.”

We were not told at the end of the parable if the elder son went into the party, if he rejected his father's invitation, or if he humbled himself, truly recognizing his Father's heart, abandoned his self-pride, allowed compassion and love to overtake his sinfulness and repented. Jesus leaves that conclusion for us to make. But, We also have a choice to make, regardless if we have been near our heavenly Father for years, or have drastically strayed away. Will we stay outside or will we go in and enjoy the Father's party?

Far away hills always seem to look green, there are many attractions in life, there are many voices saying to us “Follow Me” or “Follow your desires and you will find happiness.” But the best offer of happiness is from God our Father and his offer of “All I have is yours.” 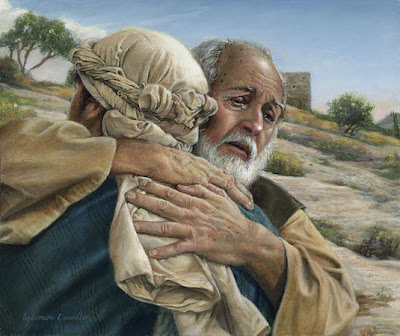 God, our heavenly Father, is outside the door waiting for us to come to him. When we return, he runs to us, grabs us in his arms and invites us into his party. For the remainder of this Lent, we might try to make an effort to answer that invitation from our heavenly Father, to better understand his heart, to understand what it actually means: “All I have is yours”