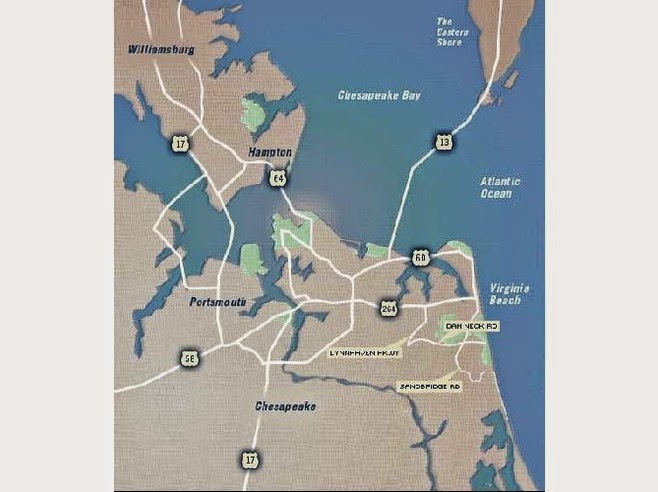 The Chesapeake Bay Bridge–Tunnel (CBBT) is a 23-mile-long (37 km) fixed link crossing the mouth of the United States' Chesapeake Bay and connecting the Delmarva Peninsula's Eastern Shore of the state of Virginia with Virginia Beach and the metropolitan area of Hampton Roads, Virginia.

The bridge–tunnel originally combined 12 miles (19 km) of trestle, two 1-mile-long (1.6 km) tunnels, four artificial islands, four high-level bridges, approximately 2 miles (3.2 km) of causeway, and 5.5 miles (8.9 km) of approach roads—crossing the Chesapeake Bay and preserving traffic on the Thimble Shoals and Chesapeake shipping channels. It replaced vehicle ferry services which operated from South Hampton Roads and from the Virginia Peninsula from the 1930s until completion of the bridge–tunnel in 1964. The system remains one of only ten bridge–tunnel systems in the world, three of which are located in Hampton Roads, Virginia.
Posted by Deacon Pat at 7:11 AM