The Meaning of Life (Homily 3rd Sunday of Lent) 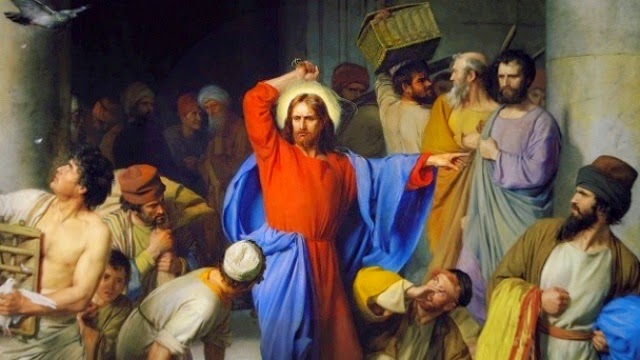 It’s common to think of Jesus as a gentle and peace-loving man, but in today’s gospel we also see a different side of him. We see him make a whip out of cords, over-turn tables throwing coins everywhere, and attempting to drive evil-doers out of the temple area. Surely many were shocked by what they saw and witnessed…. but was there a point to his actions?

Can you begin to see some similarity between this example and what has happened in our society? Just the other day I was visiting with a man who described a recent event that left him troubled. He told me that more than 10 years ago he removed the television from his home because he and his wife were fearful of what was being shown, fearful of the influential power of TV, and fearful of how it could negatively affect them and their children. He stated that since that time, 10 years ago, he hadn’t really seen much Television.

He then informed me that he had recently returned from a family visit in which he watched a variety of TV shows with his relatives. He reported that he was shocked at what appeared to be in almost every show: varying levels of nudeness, pre-marital sex, same sex relationships, affairs, and ramped immorality.  And what bothered him the most was that his relatives, who he believed were good Catholics, who attended mass every week, who adhered to all the catholic rules, and who also saw nothing wrong with the content of the shows.

He stated that in response to his relative’s apparent non-reaction, He initially questioned himself? Is Pre-Marital sex ok? Is looking at Naked and Half-Naked people ok? Is having an Affair ok?

Then he stated that he snapped out of it, recalling that all those behaviors were not only wrong, but actually sinful…. and that they ultimately separated people from God. He realized that his relatives had become “Desensitized”!  Might I ask, How many of us have also been desensitized through a gradual process, and now find little to no objection to what is so prevalent in society?

If Jesus were here today, do you think he would find our current culture Acceptable?  Holy?  And Just? I don’t think so, at least not much of it. As we begin to look at the world around us through Christ’s eyes, we begin to see a much different world. We can begin to see how certain behaviors and attitudes have evolved and have led many away from God and his ways.

Yet, it is more than just being desensitized that has caused this problem, we are still missing something important. I recall a story of a priest who was coming back to his parish house one evening in the dark only to be accosted by a robber who pulled a gun at him and demanded, “Your money or your life!”  As the priest reached his hand into his coat pocket the robber saw his Roman collar and said, “You’re a priest? You can go.”  The priest was rather surprised at this unexpected show of piety and so tried to reciprocate by offering the robber his pack of cigarettes, to which the robber replied, “No, Father, I don’t smoke during Lent.”  On the surface this sounds like a funny joke, but can you see how this robber is trying to keep the pious observance of not smoking during Lent while forgetting the more fundamental commandment of God, “Thou shalt not steal.” He is acting but not understanding the why of the action.

Maybe we are doing the same in our own lives, at least on some level.

Recently Pope Francis said that we are to ensure that on Fridays we aren’t avoiding meat to only feast and gorge ourselves on seafood. If so, what sacrifice would that be?

As Catholics we should know the meaning of life, our unique meaning. Is it clear what that meaning is in your life? Is that meaning actually the thing that directs your actions, or are your actions just something you do, a pious gesture? These are good and important questions that we need to ask of ourselves.

This time of Lent is a time to slow down, quiet down, and to seriously reflect upon our lives and upon our true meaning and purpose here on earth. It is a time to identify our shortcomings, our inequities, to repent, to turn away from sin, to reunite ourselves to Christ, and to prepare ourselves in a special and meaningful way for the coming of Lord and Savior.

Take some time today and prayerfully ask God to open your hearts and minds, to allow you the ability to see where change is needed, and for God to help you in humble way to understand your true meaning in life.
Praise be Jesus Christ, Now and Forever.