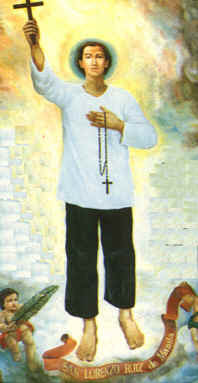 "I AM A CHRISTIAN, AND THIS I PROFESS UNTIL THE HOUR OF MY DEATH AND FOR GOD I SHALL GIVE MY LIFE. ALTHOUGH I DID NOT COME TO JAPAN TO BE A MARTYR, NEVERTHELESS AS A CHRISTIAN AND FOR GOD I SHALL GIVE MY LIFE." St. Lorenzo Ruiz.
Governor (Tormentor): If we let you live will you renounce your faith?"
St. Lorenzo Ruiz: "That I shall never do, because I am a Christian and I shall die for God, and for Him I will give many thousands of lives if I had them. And so do with me as you will please."
Lorenzo Ruiz was born in Binondo, Manila between 1600 to 1610. His father was Chinese and his mother was native Tagalog.
During his youth he was an altar boy, sarcistan at Binondo convent. He was educated by the Dominican Fathers and was their escribano because of his skillful hand and unsurpassed penmanship.
It is most commonly believed that he left the Philippines in 1639 because the Spaniards believed he had committed a crime against them.
He left the Philippines on 10 June 1636 with the aid of the Dominican Fathers and Sr. Domingo Gonzales.
In Japan, Christians were persecuted and put to death. St. Lorenzo Ruiz together with his imprisoned companions were captured and brought to Nagasaki around 10 July 1636.
There they suffered incredible torture as they were hung by their feet and submerged in water till they neared death.
They also suffered 'water torture' which brought some of St. Lorenzo's companions to recant their faith.
Needles were pressed in between their finger nails and skin and they were beaten unconscious.
St. Lorenzo never lost his faith.
On 27 September 1637 he was taken with his companions to the "Mountain of Martyrs". There he was hung upside down into a pit in what was called a 'horca y hoya'.
This was the most painful way to die in those times and involved using rocks to add weight to the person so that the person suffocates faster and is crushed from their own and added weight.
After two days he died from bleeding and suffocation.
His body was cremated and his ashes were thrown into the sea.
He always professed his love and faith in God.
He was beautified by Pope John Paul II during the Papal visit to Manila on 18 February 1981.
St. Lorenzo Ruiz was elevated to sainthood and received canonization on 18 October 1987 by His Holiness Pope John Paul II in Vatican City, Rome.
St. Lorenzo Ruiz was a layman, with two sons and a daughter. He is recognized as the first Filipino Saint and Martyr.
His story of his life is so much more then the forementioned summary of events.
Yet, his life stands simply for love, having true unyielding belief and faith in God.
For everyday Christians and Catholics around the world his life is a story of an ordinary person willing to give his life for God. But on a daily basis his life is a constant symbol of how we should never lose faith in God nor ever be afraid of meeting our Father.
Posted by Deacon Pat at 6:42 AM