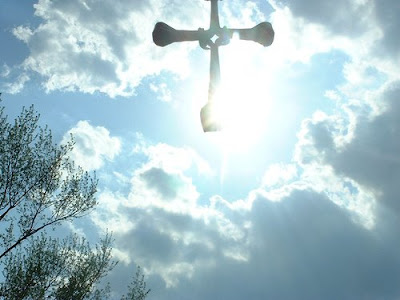 We often forget that the most primary essence in our christian life is grace. Without it, we are nothing, yet we often neglect to realize that we are who we are only due to grace.
What I speak of is our goodness, our gifts, our accomplishments are only ours because they have been given to us by God.
What we so easily forget is that when we excel, or are praised for some goodness, it really isn't us, but an aspect of God. However, who among us have not begun to believe from time to time that the accomplishment was somehow a result of some power or ability we posses unique to ourselves and controlled by ourselves.
There it is, the trap. Once we begin to believe that we posses some degree of power or ability outside of God, we begin to God-like in our thinking.
Saint Bernard of Clairvaux states the following that explains this point so eloquently as follows:
Surely so that every soul among you who is seeking God may know that she has been forestalled, and that she was found before she was sought. This will avoid distorting her greatest good into a great evil; for this is what we do when we receive favors from God and treat his gifts as though they we our by right, and do not give glory to God... For if a man who is very good takes the credit for his goodness he becomes correspondingly evil. For this is the very evil thing. If anyone says "Far be it from me! I know that it is by the grace of God I am what I am," and then is careful to take a little of the glory for the favor he has received, is he not a thief and a robber? Such a man will hear these words: "Out of your own mouth I judge you, wicked servant." What is more wicked than for a servant to usurp the glory due his master?
Posted by Deacon Pat at 6:26 PM