Obama Takes on The Catholic Church 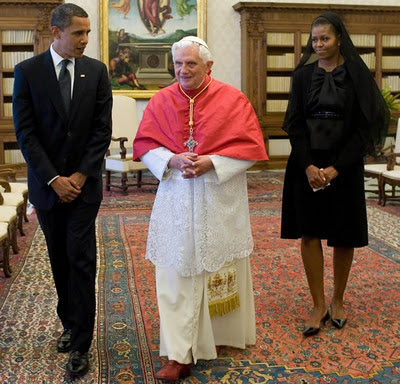 Obama tries to attack the church and all the faithful by mandating that Catholic Hospitals offer health care including contraception, abortion, and sterilization. This is a direct slap in the face and an attempt to shut down the church, weaken it, and break it apart. It clearly is the work of evil.
Yet, we are fighting back. Archbishop Dolan, soon to be Cardinal Dolan and the head of the Conference of Bishops is leading an attack right back at him. In diocese across the nation, a letter was read to all catholics (see below).
Dear Brothers and Sisters in Christ:

I write to you concerning an alarming and serious matter that negatively impacts the Church in the United States directly, and that strikes at the fundamental right to religious liberty for all citizens of any faith. The federal government, which claims to be “of, by, and for the people,” has just been dealt a heavy blow to almost a quarter of those people — the Catholic population — and to the millions more who are served by the Catholic faithful.
The U.S. Department of Health and Human Services announced last week that almost all employers, including Catholic employers, will be forced to offer their employees’ health coverage that includes sterilization, abortion-inducing drugs, and contraception. Almost all health insurers will be forced to include those “services” in the health policies they write. And almost all individuals will be forced to buy that coverage as a part of their policies.
In so ruling, the Obama Administration has cast aside the First Amendment to the Constitution of the United States, denying to Catholics our Nation’s first and most fundamental freedom, that of religious liberty. And as a result, unless the rule is overturned, we Catholics will be compelled to either violate our consciences, or to drop health coverage for our employees (and suffer the penalties for doing so). The Obama Administration’s sole concession was to give our institutions one year to comply.
We cannot–we will not–comply with this unjust law. People of faith cannot be made second class citizens. We are already joined by our brothers and sisters of all faiths and many others of good will in this important effort to regain our religious freedom. Our parents and grandparents did not come to these shores to help build America’s cities and towns, its infrastructure and institutions, its enterprise and culture, only to have their posterity stripped of their God given rights. In generations past, the Church has always been able to count on the faithful to stand up and protect her sacred rights and duties. I hope and trust she can count on this generation of Catholics to do the same. Our children and grandchildren deserve nothing less.
And therefore, I would ask of you two things. First, as a community of faith we must commit ourselves to prayer and fasting that wisdom and justice may prevail, and religious liberty may be restored. Without God, we can do nothing; with God, nothing is impossible. Second, I would also recommend visiting www.usccb.org/conscience, to learn more about this severe assault on religious liberty, and how to contact Congress in support of legislation that would reverse the Obama Administration’s decision.

Sincerely yours in Christ,