Jesus and the temple 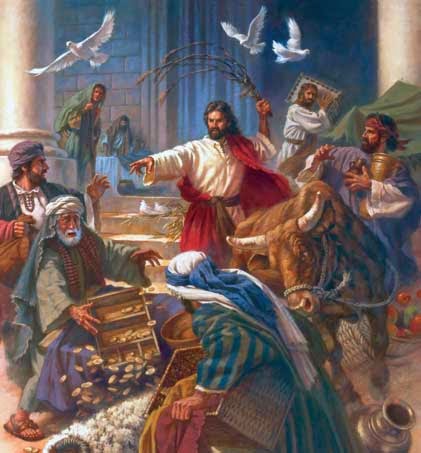 Feast of the Dedication of the Lateran Basilica in Rome

As I continued to read, study, and pray over the Gospel, I realized that there is so much more to this message than just an angry Jesus. Today’s Gospel reveals a profound message about rituals and knowing Christ in an intimate and personal way. So let’s take a few minutes and try to discern the message together.

Jesus had traveled to Jerusalem for the Passover. It was customary that at least once in a lifetime all Jewish males would go to the temple for Passover. So when Jesus arrived there must have been thousands of people filling the city, the narrow streets, and the temple area. He would have witnesses a chaotic scene; people exchanging money, the selling of sacrificial animals, loud noises, and food venders selling nourishment to the travelers, all in the proximity of the temple. This hustle and bustle, the buying and selling, and other actions apparently angered Jesus.

But as the scripture says, he didn’t just act impulsively as one might think. He thought about what his actions were to be as he took the time to make a whip out of cords, and then began chasing out the animals, turning over the tables, and telling others to take those things away. This wasn’t a fit of anger, but an act of disruption. To Jesus, this was a moment of crisis for the people of the Jewish faith. He saw that the heart of the faith had become lost in their ritualism. He was confronting the Jewish people with a deeply uncomfortable truth. This was to be a moment to re-evaluate and to re-assess. He wanted them to think: “Was it enough for the Jewish people to fulfill their rituals, or did they need to reconnect with what the rituals actually represented?” It wasn’t that Jesus was opposed to rituals; he himself was a Jewish man, steeped in the law and the ways of the synagogue. But he clearly witnessed something very disturbing, a disconnect between the people and God.

The Gospel messages are not just something of the past, they are alive, and they always have a relevant and pertinent messaged for us.

So what does all this mean to us here today? We should probably take a few moments and think about some our own actions, our own rituals. Let’s start with the first thing we do as we walk into the church. We dip our fingers into the holy water and bless ourselves. So, let’s ask ourselves, as we do this, what are we thinking? Are we immediately reminded of the waters of our baptism? Or of the cleansing, life-giving, and the purifying effects of water? Or has it become an empty ritual. How about as we approach our pew and genuflect before entering. Where is in our mind and our thoughts as we genuflect? Are our eyes immediately focused on the tabernacle and of Christ within it? Is our gesture of reverence directed to our Lord and Savior as our King? Or has it become and empty ritual?

Or what about some of the things we do within the Mass? Do we even know why we do them? I have noticed that most of us do something in this church that no other church in the diocese does, or at least I haven’t seen it done. After Father receives the gifts, the bread and wine, and they are placed upon the altars he prays over them. He then turns to wash his hands and before he even touches the water everyone stands. Why do we stand? Is it in reverence of Father washing his hands? No! We stand for what comes after the washing of father’s hands. After Father washes his hands he then returns to the altar and asks us to pray as he says, “Pray brothers and sisters that my sacrifice and yours may be acceptable to God, the Almighty Father. It is in the response, our response to God, that we stand and pray, not the washing of his hands. We are standing at the wrong time.Our actions, especially at Mass have meaning, and doing them at the correct time is important, otherwise they become empty rituals, just something we are doing because everyone else is doing it.

Please do not misunderstand my words as those of a chastisement, they are not meant to be, but rather a reminded to all of us, me included, that we are to see beyond our rituals and to know what we are doing, and why we are doing it. It isn’t so much the ritual that pleases God, but our thoughts, our hearts, and our true devotion that pleases him. Now returning to the Gospel once again, the Jews responded to Jesus by questioning him and his authority. They asked, “What sign can you show us for doing this?” They didn’t recognize Jesus for who he was. So Jesus answered and said to them, “Destroy this temple and in three days I will raise it up.” Not knowing who Jesus was, what Jesus said made no sense to them. They responded, “This temple has been under construction for forty-six years, and you will raise it up in three days?” Jesus was speaking about the temple of his Body not the physical building.

This concept of Knowing and Recognizing Christ is of great importance to us and to all Christians. It isn’t so much of knowing about Christ, as much as it is of knowing him personally. Not knowing him personally or having a personal relationship with Him is more common than you might think, even for Catholics today. Did you know that a recent study of Catholics across America showed that almost half of Catholics today think it is not possible to have a personal relationship with God,? (40%) That statistic shocked me. But it is true.Many Catholics believe in God, Jesus, and their Spirit, but find that they don’t have a personal relationship with any of them. Without a personal relationship, without an intimate relationship, that means they know about them, but they do not know them. That changes everything, especially the idea of the Eucharist. If a person doesn’t personally know Christ, then how can they recognize him and experience him the Eucharist. Maybe they don’t. Maybe for them it has become, or always has been, and empty ritual. If so, no wonder why so many have left the faith and can so easily walk away from the Eucharist and the Sacraments. They have never known Jesus. Maybe they have known about Him, but not knowing him personally and intimately, they were never able to experience him in the sacraments.Maybe that explains why the confession lines are so short, and the communion lines are so long. It is just a ritual for them. One who knows Jesus, can recognize him, and experience him in an intimate way, can clearly see him in the Eucharist. And upon seeing him, they would never want to come upon him full of sin, so they prepare themselves. They cleanse and purify themselves with routine confession so they are prepared for that holy encounter. Otherwise, unprepared and uncleansed, we are placing Jesus into something unclean, our sinful bodies.Saint Paul tells us “Therefore whoever eats the bread or drinks the cup of the Lord unworthily will have to answer for the body and blood of the Lord.” Meaning: directly sinning against Jesus himself.”

There isn’t one of us who travels through life without experiencing sin, and in this current culture serious sin isn’t uncommon. It is that sin that must be confessed and forgiven before taking Holy Communion.Saint Paul urges us by saying. “A person should examine himself,for anyone who eats and drinks without discerning the body, eats and drinks judgment on himself.”I realized these are strong words that I am sharing today, and some of you might be put off by them. I hope not! Wasn’t Jesus acting in a strong way in today’s Gospel? Yet that doesn’t mean he wasn’t acting in love, nor does my message mean to be anything but an act of love. Love doesn’t always mean that we have to be agreeable, complacent, passive, and non-judgmental as some might want us to believe, sometimes it means the opposite. Especially when done with compassion, empathy, understanding and for the right reason. And the saving of souls feels like a pretty good reason to me. Maybe not unlike the Jews at the temple, is it a possibility that today’s Gospel message was meant to be a disruption in our lives. Maybe we are now being confronted with a deeply uncomfortable truth. Maybe this is to be a moment to re-evaluate and to re-assess. Is it enough for us to fulfill our rituals, or do we need to reconnect with the heart of the faith that is at the core of the rituals?The good news today comes in the reminded that: we are not to be caught up in empty rituals; we are reminded that the rituals have embedded within them wonderful and mysterious meanings and that they are to nourish our lives.And the good news is that we are to work at developing a deep, intimate, and personal relationship with Christ.And that by doing so we will be able to recognize him in the Sacraments, in those we love, in those around us, and even in those that at times we struggle to love.
Posted by Deacon Pat at 6:58 AM