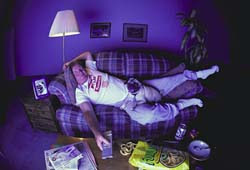 I just got off the phone with a friend, actually my best friend from high school who tracked me down. I haven't spoken to him in years. It was so nice to hear from him. We actually have a 25 year high school reunion next week and it will be great to see everyone.
Well anyway, I asked Paul what he was doing, he stated that he was sitting on the couch watching TV. Paul, don't take this blog personally, our conversation just started me thinking. For all I know, you might only watch 30 minutes of TV a week, but what about others.
I started to think about how many men were sitting on the couch all weekend watching TV. I asked my wife to guess, she stated that she would bet that over 50% of men watched >12 hours of TV today.
Then I started to think. When a person sits in front of a TV, what is he doing that is contributing to our world, our society? What does the behavior of watching TV do to make this a better world?
How many people sit in front of a TV for greater than 5 hours a day.
I often think that the greatest invention to help the cause of the devil has been the TV. What other device do you know, separates people from their family, stops dialog between people, places someone else's thoughts and ideas constantly in front of you, and you find it almost impossible to turn off.
A parent can try their best to instill good values in their children. Lets say that a parent dedicates 30 minutes a day (I am being generous, most parents do much less) talking to their children about life, making good choices, and discussing topics regarding morals and values, but at the same time the child is sitting in front of a TV set for 3-5 hours a day.
I haven't really seen much TV for ~ 4-5 years now, and can guess how the shows have progressed, but I pose this question: Do the shows that your children are watching reflect your values and morals?
If they do, that is great, you probably select all the shows for the kids, and mute the commercials. But if they don't, then why are you wasting your time trying to teach the kids your values and morals, they are being significantly more influenced by the TV programs.
OK, back to self pleasure. The more I think about it, TV is more about self pleasure than anything else. You could give the example of some of the great shows on TV, like National Geographic (If that is still a show), but how many of the kids or adults only watch that type of show.
I often tell my kids, "be careful what you allow into your mind, once it enters into you mind, it is there forever."
Adults have a greater ability to discern situations, events, and can often watch shows while still keeping a balance between what is right and wrong. However, Kids often have not developed that ability and what they see is automatically accepted as normal and acceptable.
Also, it doesn't matter how great your discernment skills are, if you continually fill yourself with trash, it has to make some kind of impact on you. 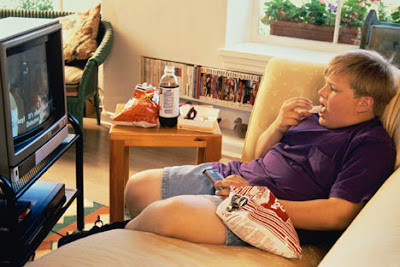 I heard on the radio that > 50 of Americans are now overweight.

I would guess that the number one hobbie for Americans is TV watching, do you see a correlation.

Only by the grace of God, Liz and I decided that we should get rid of our TV (I think 5 years ago) and to this day I feel so strongly that it was one of the best decisions we ever made, not only for raising kids, but for Liz and me as well.

TV is all about self pleasure, if you didn't waste your day watching TV, what else could of been done today.

Do you think Jesus would be a TV fan?