HELL Is Real, Don't Be Fooled! 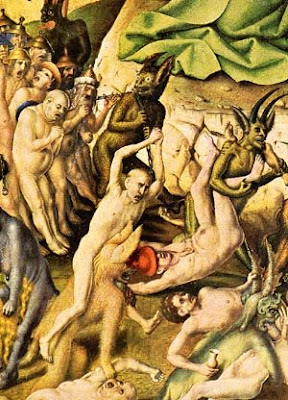 I cannot believe it.
I just read an article by a clergy member in a newspaper in which he stated that in his opinion the belief in Hell is still up for grabs.
WHAT!
The Idea of Hell is up for grabs.
Basic Christian belief is in the four last things.
Death, Judgement, Heaven and Hell.
If a person doesn't believe in hell, what would be his motivation to refrain from sin. If he didn't have to accept responsibility for his actions, he could let every temptation lead him through his life.
I think any clergy member who spreads the rhetoric that hell is up for grabs is doing a great disservice to Christians.
Hell is real. It is as real as Heaven.
Be cautions of strange teachings, they will lead you right to hell.
Hebrews 13:7-9
Remember your leaders who spoke the word of God to you. Consider the outcome of their way of life and imitate their faith. Jesus Christ is the same yesterday, today, and forever.
Do not be carried away by all kinds of strange teaching. It is good to have our hearts strengthened by grace and not by foods, which do not benefit those who live by them.
- - - - - - - -
Why would at the time of judgement, God separate the sheep from the goats, some on his right and some on his left? Some will be allowed entrance into heaven and some will be turned away.
What does our faith teach us about Hell?
HELL
(CCC 1033-1037)
1033 We cannot be united with God unless we freely choose to love him. But we cannot love God if we sin gravely against him, against our neighbor or against ourselves: "He who does not love remains in death. Anyone who hates his brother is a murderer, and you know that no murderer has eternal life abiding in him."
Our Lord warns us that we shall be separated from him if we fail to meet the serious needs of the poor and the little ones who are his brethren. To die in mortal sin without repenting and accepting God's merciful love means remaining separated from him for ever by our own free choice. This state of definitive self- exclusion from communion with God and the blessed is called "hell."
1034 Jesus often speaks of "Gehenna" of "the unquenchable fire" reserved for those who to the end of their lives refuse to believe and be converted, where both soul and body can be lost. Jesus solemnly proclaims that he "will send his angels, and they will gather . . . all evil doers, and throw them into the furnace of fire," and that he will pronounce the condemnation: "Depart from me, you cursed, into the eternal fire!"
1035 The teaching of the Church affirms the existence of hell and its eternity. Immediately after death the souls of those who die in a state of mortal sin descend into hell, where they suffer the punishments of hell, "eternal fire." The chief punishment of hell is eternal separation from God, in whom alone man can possess the life and happiness for which he was created and for which he longs.
1036 The affirmations of Sacred Scripture and the teachings of the Church on the subject of hell are a call to the responsibility incumbent upon man to make use of his freedom in view of his eternal destiny. They are at the same time an urgent call to conversion: "Enter by the narrow gate; for the gate is wide and the way is easy, that leads to destruction, and those who enter by it are many. For the gate is narrow and the way is hard, that leads to life, and those who find it are few."
Since we know neither the day nor the hour, we should follow the advice of the Lord and watch constantly so that, when the single course of our earthly life is completed, we may merit to enter with him into the marriage feast and be numbered among the blessed, and not, like the wicked and slothful servants, be ordered to depart into the eternal fire, into the outer darkness where "men will weep and gnash their teeth."
1037 God predestines no one to go to hell; for this, a willful turning away from God (a mortal sin) is necessary, and persistence in it until the end. In the Eucharistic liturgy and in the daily prayers of her faithful, the Church implores the mercy of God, who does not want "any to perish, but all to come to repentance": Father, accept this offering from your whole family. Grant us your peace in this life, save us from final damnation, and count us among those you have chosen.
----------
The Doctors of the Church:
Saints Augustine, Catherine, Theresa of Avila, Therese, John of the Cross,
all warned that without a firm belief in the reality of hell, one is easily lead into sin and assured a place in hell.
Posted by Deacon Pat at 8:09 AM